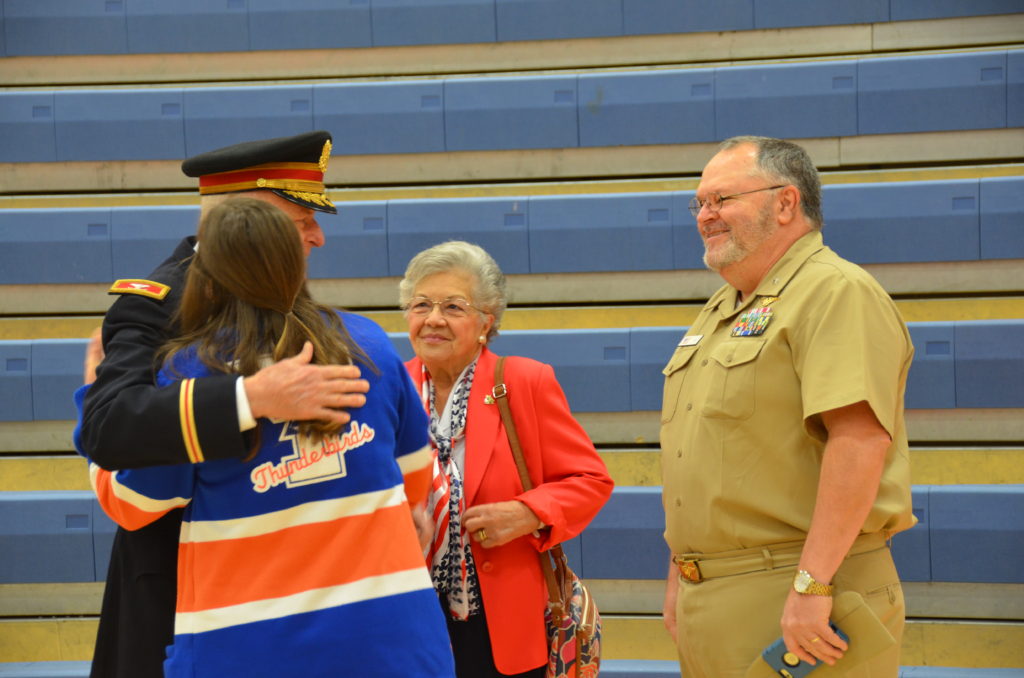 Timpview has a tradition of hosting a Veterans Day assembly honoring our veterans; this year was the tenth anniversary. Mr. Stevenson opened the ceremony, detailing the order of presentations that would follow his opening. Dr. Montero followed him, thanking the veterans for their service, some of which are faculty at our school. He also thanked the students, because they always “display how classy they are.”

Dr. Montero finished his remarks and the American flag was brought in, in addition to the giant flag adorning the south wall of the Thunderdome. Students stood with hands on their hearts, while the veterans stood at attention in respectful salute as the flag was brought down the aisle between the veterans seating area. All was quiet. After the pledge of allegiance was performed and led by Miss Provo, the audience was seated.

Caleb Chadburn went to the podium and also honored the veterans, ending his short speech with the words “God bless our veterans, God bless America, and thank you for your time.” Then, the national anthem was sung. Unlike in years past, none of the students cheered; an improvement in deportment, as silence during the anthem is the ultimate respect. Another new twist occurred, as Ms. Baker was recognized for her hard work in organizing the assembly.

Then, students and veterans stood as the emblem of their family’s military branch was projected onto the screen. The Army, Marines, Navy, Air Force, and Coast Guard were recognized, and audience members stood proudly and clapped along to the beat of the patriotic song that the Timpview Band was playing.

Next, individual veterans were honored as students gave speeches recognizing their service. Finally, a speech by a veteran, Steven Shallenberger. He told us of the importance of the Declaration of Independence, the Constitution, and the Bill of Rights.

All in all, it was a very successful Veterans Day assembly, and Timpview students are prouder than ever of their country.