Utah resident, Glenn Stucki suffered a severe brain damage when he was hit by a jet ski at a young age. He remains in a partial mentality of an 11 year old and will never fully mature in certain aspects of his life.

He fell into a coma for six weeks, and his uncle painted pictures of superheroes to hang all over his hospital room. This way, Glenn would be comforted when he woke up .

This “Superhero Effect” resided with him through his recovery, and became an awakening point that has influenced his life and others. This lead to his current passion.

Glenn Stucki and his college friend Bart Hawkins created Change4Love, a non-profit organization, that revolves around four artists (Glenn included) with special needs. The artists donate their original paintings to children’s hospitals, as well as children who have been through trauma.

After the original paintings have been donated, a copy (or print) of the painting is then available for anyone willing to donate to the organization. Change4love will use the donations to directly fund art students with special needs in the program.

“We get them art supplies and just build the program up because we eventually want to build a school”, said John Johansen, a donation collector at the Provo Towne Centre. Johansen has worked for the Provo School District for the last 5 years, assisting kids with special needs. He says being in Change4love is “Kind of the perfect job” for him.

Change4love is about breaking stereotypes about the special needs community. Co-founder Bart Hawkins said, “We want to show people that just because someone has a special need, it doesn’t mean they are not able to do things. Not just not able to do things, but amazing things. What we’re hoping to also do is to inspire the average person to dig deep within themselves and realize ‘I can do amazing things’.”

Hawkins has been personally visiting his student’s homes to teach them and help them progress. He still had paint on his hands the afternoon of the interview.

Change4love wants to inspire by setting the example of the artists. In truth, everyone has a type of “special need”, whether it be anxiety, depression, insecurities or just by going through a rough patch. “That’s why our themes are superhero based” Hawkins said. Maybe we could start seeing our trials as something that makes us amazing and different.

Bart Hawkins wants Timpview to remember, “Love is the ultimate drive behind our mission, it should be behind everyone’s mission. If you don’t do what you love, you won’t have a good chance at having a fulfilling life. The main difference between a superhero and a supervillain is love. They both have super powers, they both have amazing gifts but what they choose to do with those gifts is what makes the difference”. 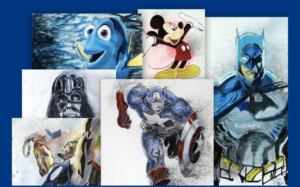 You can donate any sum of money, depending on how much you can spare. Some people donate as little as a dollar, and they receive 1 of the 250 paintings of their choosing. These prints are available to the public at the Provo Towne Center Mall, as well on the  website.