An outside look at Timpview’s ‘into the Woods’ 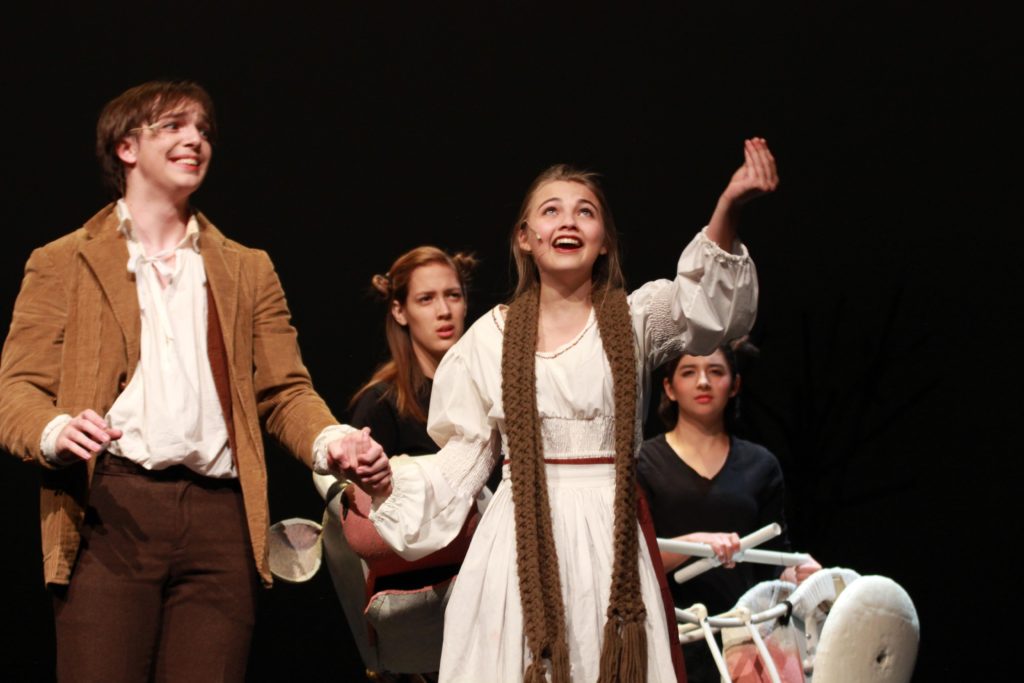 Timpview’s vision is “to empower every student to become college, career, and life ready by embracing growth, inclusion, and excellence.” The Timpview Theatre program has done an exceptional job at embracing all of these standards, evident by their recent production of Into the Woods.

Timpview Theatre puts on multiple productions across the school year. The musical is one of their biggest projects, involving dozens of students who act, play in the orchestra, work the tech, advertize, organize, and even teach.

The musical is open to anyone who wants to audition, as opposed to other productions put on by the top drama class. Hanna Schneck played the Witch, one of the main characters.  “In theater we have this idea of ensemble,” Schneck explains. “It’s when all the different parts, all the different people who are so extremely different come together and make something amazing and beautiful, and they put their own individual self into it, not sacrificing who they are to make a whole, but putting themselves into the whole.”

All these individual parts are diverse in nature.

Rose Asplund, who was the stage manager for Into the Woods and was in charge of a lot of organization for the play.  “I’ve always found the tech end fascinating, but the more you get involved in it, the more you realize just how much there is. It’s not just helping out the actors, it really is an art in and of itself.”

“The lighting and sound design, you don’t think of it as art, but that’s what it is. You have to start from scratch and build something,” Asplund continued.  “To me it’s really fun to try and see things work together, and that’s why I’m the stage manager.”

Julien Doria was in the tech crew, and helped with the stage and the lighting.“I counted at least 84 hours spent at school the week before the play started… When you put all your skills together, being part of the pit, being an actor/actress, being part of tech, you’re busy all of the time, and you get to learn more from others.”

Alisha Kirkland played the Baker’s Wife, another one of the main characters. She says, “I like seeing all the different parts go into it, because everyone works really hard and they’re so good at things I’m really bad at. I like the feeling of unity it creates, because we need everyone for it to work.”

The musical has provided students with opportunities to grow, from those who are new to the activity to the seasoned veterans who have had years of experience.

Julien Doria has participated in tech crew his since sophomore year.  “I’m really bad at acting,” Doria said. “I want to go into computer science, so I thought combine those two, electronics and acting and you get: Tech Crew, which is a class, and I think people should take it more often.”

Rose Asplund has never acted in a play at Timpview, but jumped into the stage managing position for the musical last year and for Into the Woods this year.  “It completely changed my future plans. Before my junior year I wanted to be a high school teacher, and then I got more into managing and I realized that it’s really what I’m passionate about.”

“I love helping people out and working out little details. I went from wanting to go into the sciences and teaching high schoolers to wanting to go into something like business management,” Asplund said.  “It totally changed my plans because I realized it was something I was passionate about, and that I was good at and that I really enjoyed.”

Hanna Schneck is a junior this year, and has been acting and singing her whole life. She talks about how Timpview Theatre has shaped her, “In middle school I wanted to be an engineer, that was my life plan… But being here really helped me see that this is what I love to do, and that if I want to do it, it’s possible. It changed my life plan.”

The school musical is a unique experience that helps unify people at Timpview. It has taught people how to work together, how to build things from scratch, and how to be confident. Those are some of the best things any program could teach students.