Introduction Of The Plywood Maze 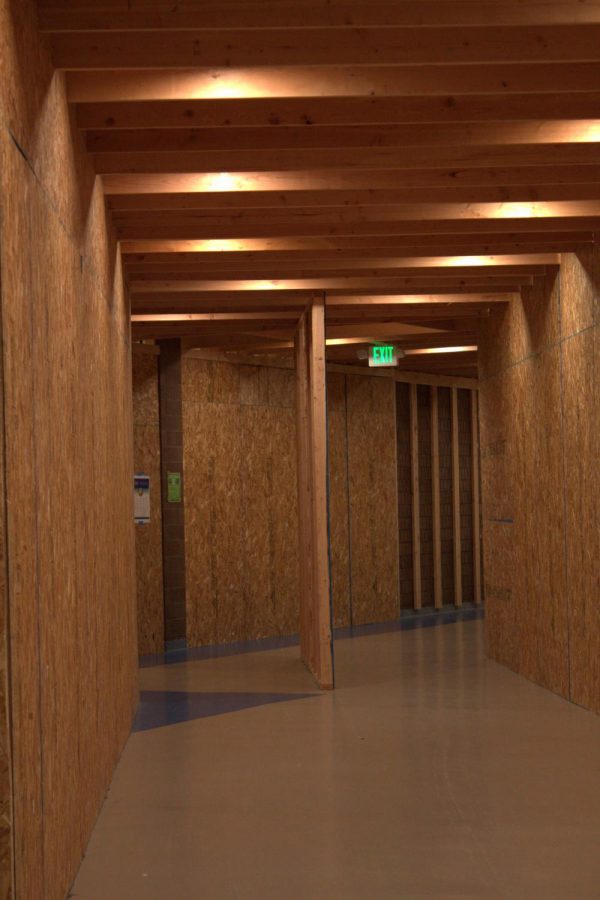 Between Timpview High’s frequent rainfall of bricks and shaky foundation, construction for the safety of future students has been an inevitable fate for a long time. In the meantime, students and teachers alike are adjusting to the struggles that come with making room for plywood walls and closed hallways. Everywhere feels cramped, parking is a shell of what it used to be, and Timpview feels like a maze, something everyone- new and old- is still trying to figure out.

Our journalism staff recently interviewed Mrs. Karms, a Special Ed teacher new at Timpview this year. When asked about how construction has affected her experience these last few months, she quickly stated that, “[the construction] definitely was confusing”, as she suspects it must’ve been for everyone. She mentioned that “teacher parking has been confusing”, and explained  that, “if you’re not here by 7am, you don’t get a parking spot.” Getting around school has proved just as challenging for her in this new patchwork environment. “I’m not moving around the school, I just go where I’ve been ‘cause otherwise, [I’ll] get lost.”

This will probably ring a bell for incoming freshmen, who have been thrown into  completely new surroundings that- along with being an unfamiliar school and building- have a disorientating construction environment to learn and navigate. While the construction itself is new for everyone, our freshmen and new teachers seem to be struggling the most, since this is likely the first year they’ve walked through Timpview’s halls. The construction on Timpview is here to stay for a while- with what we’ll sure with be an amazing result- and the class of ‘25 will watch it progress throughout their entire high school experience.  We asked a freshman how they thought their high school years might be affected by the construction, and they commented that it would be a “unique and interesting” experience, but optimistically continued that so far, it’s “not that bad.”

In contrast, Dr. Gabbitas, who has been teaching at Timpview for 5 years in the I-wing- where the construction has a distinct shadow- describes it as causing “some inconveniences”. As he works with robotics, it’s been frustrating that he can’t unload and load equipment easily due to his door to the outside being closed off. However, Dr. Gabbitas notes that the biggest effect of the construction has been the split lunches. He hosts and supports e-Sports club and robotics club, who used to frequently meet at lunch. Compared to normal years, he says, “There isn’t that common time when clubs and teams can meet during lunch”. He explains that, “Many [students] have other activities after school, so they can’t meet after school. That has affected the extracurricular and social experiences of a lot of students.”

This year, since parking is so scarce, only seniors can buy parking passes, but even that has its own host of issues. Seniors have parking at a church parking lot down the street, but there’s a bit of a walk to get to Timpview, and on top of our 7:30am start time, that means a much earlier rise for many students. With everything mentioned so far, ending your high school experience in a year like this can be a bit of a mixed bag. When we talked to a senior named Alysse Pope about her last year of high school ending during such a cramped and confusing time, she had a positive outlook on it, saying, “It’s been different than [I] expected, but [it’s] also cool to end on such a unique time.”

These next few years are definitely going to be memorable, and while our campus is going to keep changing, we’ll continue to keep finding ways to put handle this unique situation with a positive outlook. At least we can all agree that when the new Timpview High School is finished, it will surely be a better, more sustainable, safer place to learn and grow.