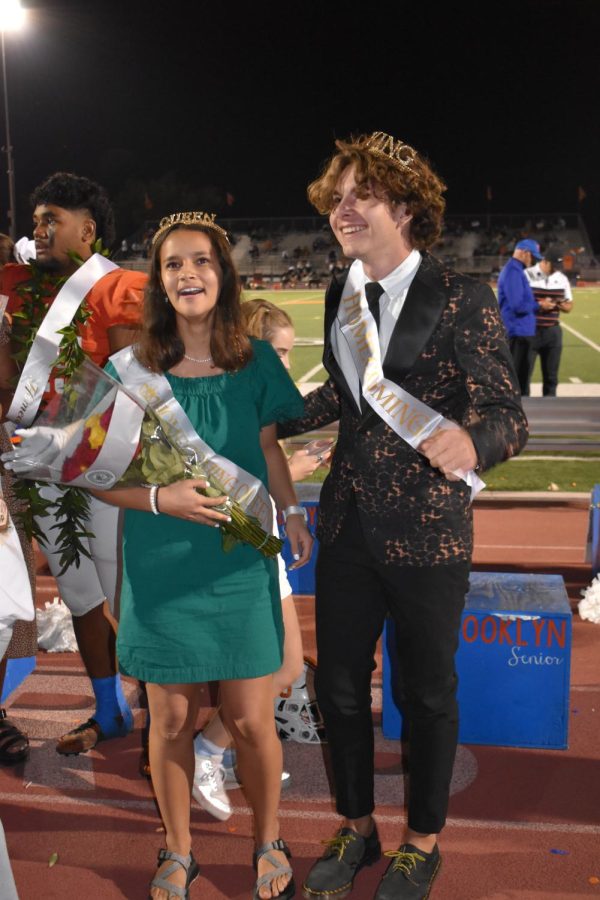 In this piece, this year’s homecoming King (Isaac Craig) and homecoming Queen (Anna da Silva) share their experience of winning the greatest competition between students that Timpview has to offer.

On a lovely Friday morning roughly 6 hours before school I was woken up by a bunch of the student body officers. Once I was semi-conscious, I was informed that I was a candidate for the title of Timpview’s 2021 Homecoming King. The Student Government then decided to celebrate with a large confetti cannon. As you could probably guess, I was not too thrilled to clean up that mess. Would it not have sufficed to just send me a text? Mess aside, I was pretty stoked to have been elected to the royal court, but I would have never thought I would be the one to actually win the title of homecoming king! I was running against two of the best football players at this school, and in a school where football is a big deal, of course, I assumed that my chances of winning were pretty slim. I decided to have fun with it anyway, so I bought a wild suit jacket. I wanted to look fly for the rest of the school to see. I probably looked like a dork with my cheetah print suit jacket on, but I was having fun, and when you’re having fun, it’s hard to pay attention to what you look like. I’m very honored to have won King, even though I am a dork.

I never wanted to say that I peaked in high school but I have to say it seems as though it can only go downhill from here. As I arrived at work- my old elementary school- on a beautiful Thursday afternoon, I was ready as ever to clean up after small children who have no respect for leaving dead grass and wood chips outside where it belongs. On this particular day, I received a very cryptic message from my boss. She informed me that I should stick around the main office until 3:45. I was suspicious but returned to work. About 5 minutes later I really needed to pee. As I was walking past the office I was shocked to see about 3 of my best friends, one armed with a confetti cannon. They very awkwardly handed me a manila envelope, which I opened to read a paper that said: “nominated for homecoming royalty”. Safe to say, I was shocked. THESE LIARS! For days I had pestered three of my friends about what they knew of the homecoming royalty shenanigans. All three very convincingly claimed they had no idea! I also realized my mother had known all along and had also lied. They then popped the confetti cannon which I begrudgingly cleaned up. Unbeknownst to them, that confetti would linger around the school for days. The moral of the story is everyone I know is a liar, and student gov kids do not clean up their confetti cannon messes, and being Homecoming Queen is pretty epic.